A beautiful and sad film about grief. It’s kind of a ‘revisionist revisionist’ western. The main character, Fern (Francic MacDormand), leaves her home following her husbands death and the literal ‘closing down’ of her mining town after the mine shuts its doors. She travels America in her van, leading a ’nomad’ life.

The revisionist period of Westerns begins in the 60s (although maybe even earlier, depending on how you want to categorize The Searchers, etc.) with films like The Man Who Shot Liberty Valence (1962), and continues throughout the 70s and 80s (MacCabe and Mrs Miller, Pale Rider), and probably reaches its peak with Unforgiven (1992). Though, the tradition doesn’t stop there. Films associated with this movement attempt to break apart the iconography and mythology of the Western genre in order to reveal a different vision of the West, one which takes into account the deeper questions around violence/murder, masculinity, race, and so on. There are many, many films and TV shows in this genre.

Sometimes, though, presenting a more ‘adult’/‘realistic’ portrayal of the West is simply a way of ’re-branding’ a genre, of making it more appealable to a new audience. For example, many contemporary ‘superhero’ movies franchises do the same thing. I always hear people trying to explain how the ‘D.C.’ universe is far more raw/gritty than the ‘Marvel’ one, as if knowing the nuances here, and choosing the more ‘realistic’ mode of representation is supposed to signify ’taste’. Yes, some of those films can be quite good, but at the end of the day, those friends who harp on and on about the psychological depth of this or that character, also will have a figurine of that character, or will get ‘hyped’ up for the latest release.

I’m not trying to say that people shouldn’t get excited about movies or merchandise, everyone is free to do as they please. But I think we need to be honest about how we are still in highly ‘commercial’ territory. The revisionist Westerns are also commercial. That’s the thing about movies. They are expensive, they need to make money. I still think movies like MacCabe and Mrs Miller or TV shows like Deadwood are infinitely better and more complex than any superhero film, though I do accept that it may just be because of a personal bias against the superhero genre, and a deep love for Westerns. Nevertheless, in light of more recent approaches to the Western genre (Riders, First Cow, Cowboys, Leave no Trace, etc.), those classic ‘revisionist’ Westerns still seem bound to the genre conventions they are pushing so hard against. It’s like the old Nietzsche warning - “Beware that when fighting monsters, you yourself do not become a monster.” The revisionist Westerns established their own ‘iconography’ in place of the one they were trying to destroy, and it’s an iconography that directors like Quentin Tarantino and the Coen Brothers are still profiting off.

Anyway, *Nomadland *and those other recent films, have been returning to Western iconography, but in a different sense than the revisionist Westerns. It’s as if all the ugliness of the West had been purged during all these decades of revisionist Westerns, and now a host of new directors are seeing again the tenderness, natural beauty and comradery that was always inherent in the Western genre.

The movie is a masterpiece in the sense that it manages to convincingly communicate two very conflicting things at once:

America is fucked. We all know this of course, but yeah, here we see so subtly but powerfully all the inherent problems of capitalism. It’s better just to watch the movie and listen to the characters’ stories than for me to go on about them here.

Toward the end of the film, the famous, iconic ending of The Searchers is reproduced, but with a twist. The Searchers ends with the familiar John Ford image, the cowboy framed in the doorway, on the threshold between civilization and wilderness. In both The Searchers and Nomadland (and all Westerns really), the cowboy only dwells a moment in the doorway, and then wanders out again. In The Searchers, the inside of the house, where the camera is shooting from, is dark, while outside it is bright and beautiful. The door closes, leaving us in civilisation, safe. Chaos had been conquered and tamed by the cowboy, the girl was home safe, and the people could get to their job of building the country. 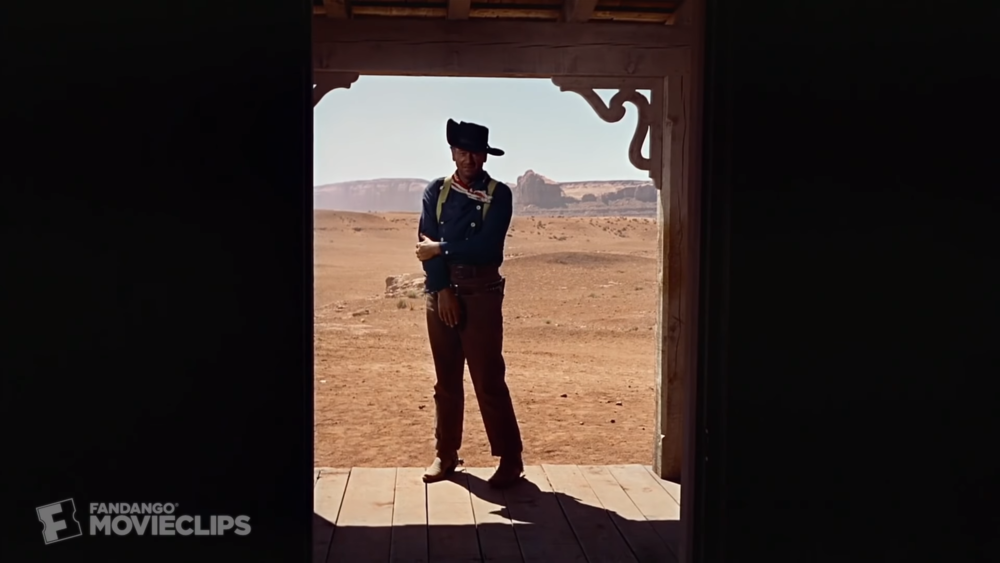 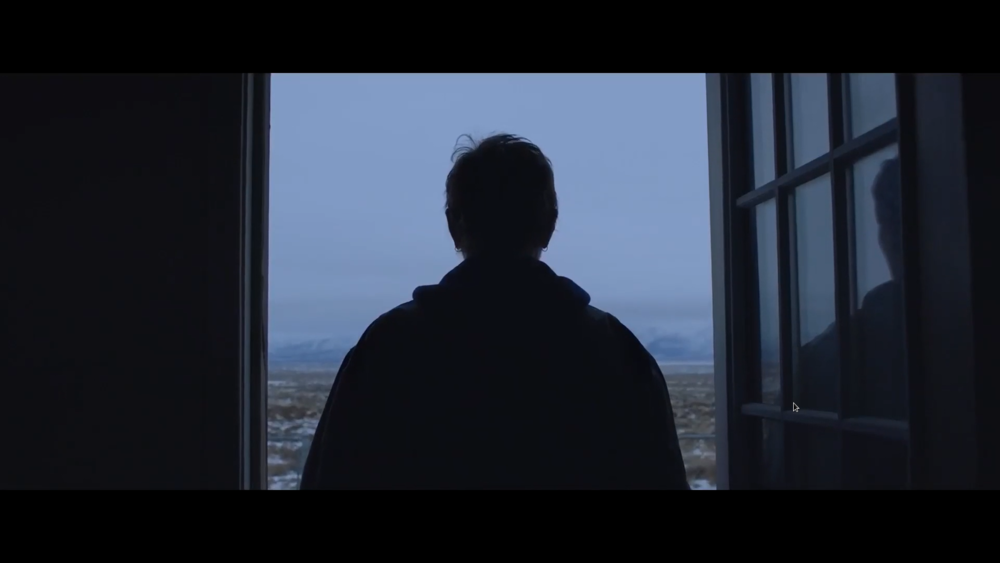 In Nomadland, the camera also shoots the scene from inside the house, only this time the house is abandoned. Not only that, but the whole town is abandoned. It is a part of ‘Empire’, a real life Gypsum mining town that was established in 1923 and literally closed down in 2011. We are at the other end of the cowboy’s dream now; the civilsation, the garden in the wilderness, was built up, and people came to settle there and start families, just like the cowboys had promised. Then, that dream was outsourced to China, and the people in the towns were left with nothing.

In the Nomadland scene, the camera, instead of remaining inside, follows Fern out, embracing the beauty of the landscape, fleeing from the decaying American mining town.

This leads us to the second point the film communicates so forcefully - the power of nature. Even though there is lots of ’natural’ beauty in the movie, as with all Westerns, what I mean by ’nature’ is more like a process of continuous death and renewal. The process of grief, in particular.

In terms of the actual representation of the natural landscape, the movie seems to be doing something very determined and interesting. There are moments of beautiful evening skies, and roaring seas, and snow-covered hills, but these moments are balanced with moments of purple/gray and coldness. When those moments of natural beauty do appear, they feel powerful. Their aesthetic function becomes one of rejuvenating the viewer, making them see the same gray desert setting in a new light, over and over again. The alternation between the different modes of nature is gentle - like casually walking though a gallery of landscape images - but it is also ceaseless. There seems to be an infinite energy to the cycles of nature.

This ceaselessness and this constant alternation between the beautiful and the mundane, the powerful and the weak, is mirrored in Fern’s experience and in the lives of humans she encounters. There are many moments of repetition and renewal throughout the film. The image of rocks/jewellery/knick-knacks is repeated a lot, perhaps a testament to the human spirit’s ability to endlessly chip away and shape hard matter. The image of Fern going to the bathroom is repeated (and, indeed, is part of the opening sequence). The same people are left and re-encountered over and over again, a motif summarised movingly in the speech by Bob about his son’s suicide. In the end, everything returns and is made new again.

In one scene, Fern encounters a young man for the second time. The first time, she had given him a lighter, and now he gives her one to return the favour. He tells her about a girl he likes and writes to, and she gives him a poem to include in his letters. The poem was her wedding vow. I really like this scene because it reinforces the motifs of renewal and return, but it also hearkens back to the film’s Western roots. The poem is a Shakespearean sonnet, and any fans of classic Hollywood Westerns will know that Shakespeare was a common source of entertainment and beauty in the lonely frontier towns. The same old ghosts return again and again, a poem can have many lives, many settings. In classic Holloywood Westerns, the setting for Shakespeare is the music halls of the frontier towns - spaces for settlers to bring with them the culture and history of the lands they were fleeing. In Nomadland, the setting is an abandoned roadside shared by two homeless people smoking cigarettes. The civilisation ‘projects’ began by the first settlers seems to have failed somewhat, but the spirit and ghosts live on in strange places of exile and abandonment.

The philosopher/theologian Catherine Pickstock has written about the concept of identity using the idea of ’non-identical repetition’. In modern society, we are subjected to endless, brutal ‘identical repetitions’ (products, events, technologies, etc.). But, the true nature of things is to repeat ’non-identically’. She uses the image of a snake to illustrate the point further - to move forward, the snake first turns back on itself, but then turns back the other way again, and so on, and so on. This ‘serpentine motion’ represents our journeys as selves. We never simply move forward in a ‘straight’ line. Things pull us back - memories, nostalgia, grief - and things pull us forward again. This movie is full of instances of ’non-identical’ repetitions. Objects (the rocks, lighters, camping chairs, etc), landscapes, people, return again and again, but never quite in the same way. This is perhaps why a film like this could only take place ‘outside’ or on the edges of society. Non-identical repetition depends on chance, contingency, exposure, vulnerability. Those kinds of things seem to be less and less present for us today.

The film succeeds, though, because it never ‘romanticises’ this space. It manages to provide both a forceful critique of the conditions that lead to this life and a convincing portrait of the human ability to transcend those conditions through continual renewal and reinvention. It’s an intriguing and moving film. Highly recommended, especially for fans of Westerns.